Our handcrafted wooden boat, not much bigger than a canoe, struggled against the current as we made our way up the Lemro River in western Myanmar. The vessel was essentially a smaller version of a long-tail boat commonly seen on Bangkok’s Chao Phraya River.  Powered by a tiny two-stroke engine, the boat was not built for speed and it took the better part of two hours to reach our first destination; a cluster of tiny villages in Chin State, home to a remarkable group of women known as the Tattooed Ladies. 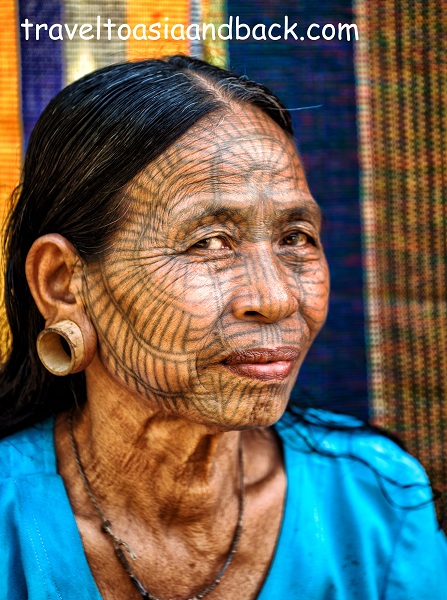 Sharing borders with Rakhine State and Bangladesh, Chin State in western Myanmar is a remote and largely undeveloped region. Covering an area of over 13,000 square miles (36,000 km²), it has the highest poverty rate of any state in the country. Many of its mountainside villages are essentially isolated due to a lack of infrastructure. Most of the state’s 780,000 people are known as the Chin. They are one of Myanmar’s “major ethnic groups”. The Chin people are further subdivided into numerous tribes.

Visiting ethnic villages in neighboring Chin State is a popular activity with the few travelers that make the journey to Mrauk-U in Rakhine State. The highlight of the trip is meeting and interacting with the famous tattooed ladies. Generations ago the young girls of these villages had their faces covered in tattoos. Applied with plant thorns, intricate patterns were painfully applied using soot from burned tree bark mixed with leaves and water as ink. 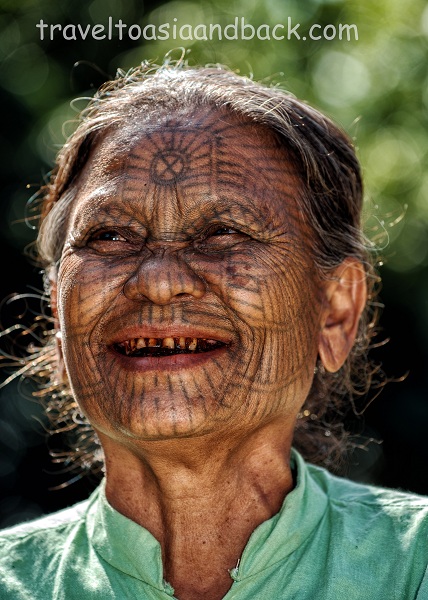 There are several possible explanations for this unusual custom. One theory is that the women were marked to make them unattractive and therefore less likely to be kidnapped by rival ethnic groups. Others think that the markings were done as a way to differentiate people from various clans or villages. As time passed the tradition became an accepted cultural norm and the tattoos were considered to be beautiful. Since the practice was outlawed in the 1960s, the remaining tattooed women are all in their seventies. They are the last generation that can offer us a glimpse into these unique peoples’ past.

Like many independent travelers I rarely use guides or participate in organized tours. However, I correctly surmised that a trip to these villages requires a guide particularly if your goal is to meet and photograph the tattooed ladies. Taking a tip from TripAdvisor, I contacted Nay Chay, an Mrauk-U resident who has been guiding guests to these villages for many years. He is a charming, energetic and friendly man who seems to be constantly laughing and smiling.  His good humor and enthusiasm is infectious and one can’t help but enjoy his company.

The ride itself was rather scenic. Lush green vegetation and farmers’ fields blanketed both sides of the Lemro. The fresh water river is vital to the people who live on its shores. Not only does it provide water and fish, it serves as a major transportation route for both people and goods. As our craft meandered up the winding waterway we passed many other boats engaged in fishing, collecting river rock and towing huge bundles of bamboo destined for Bangladesh.

Eventually our vessel pushed up on the river’s west bank – our first stop. Nay Chay informed me that the first three villages we were to visit, (I have some doubts as to their correct names), are not regularly visited by tourists, and would not have any “souvenir shops”. Sure enough, there were only a few locals and their livestock to greet us. I have been to many impoverished rural villages in southeast Asia but I have never seen one so neat, clean and organized as this one. Despite living in tiny bamboo houses without water or electricity they are obviously proud people who take great care of the few things that they do have. These people appeared pretty apathetic to my presence and didn’t ask me for a thing. While trekking through the villages we met three shy, diminutive tattooed women, who, with some coaxing, agreed to pose for some pictures. 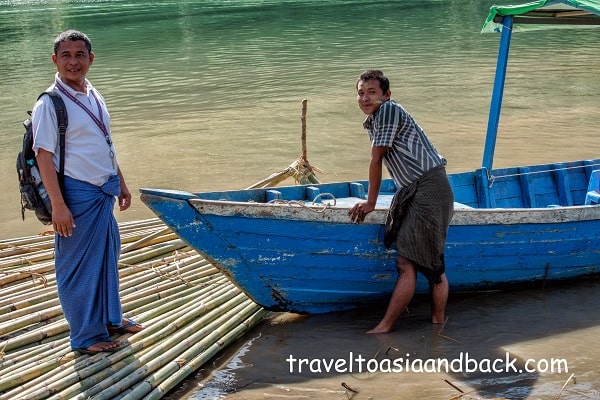 After a few hours we got back in the boat and headed up and across the river to Pan Paung, a village on the river’s east bank. I am told that this spot is frequented by as many as 10 tour groups per day and has many “gift shops”. Chin ladies are well known for weaving and in this area produce “towels”, which they sell to tourists. In reality the “gift shops” do not exist. The towels, more accurately described as scarves, are simply draped over the bamboo fences that guard each home from intrusive pigs.

In this village I met several very enthusiastic tattooed ladies who greeted us with a gift of small bananas. I believe that in the Caribbean we called them apple bananas. Anyway, I am quite certain that if we had stuck around, a sales pitch would have been forthcoming. Seeing that the women already had a group of four other tourists to entertain, we continued on our trek through the village. It is worth noting that during my four-hour stay in Chin State, I only ran into six other travelers.

Portugal - a destination for digital nomads all over the world

6 of the UK's most vibrant destinations by Collecting Other Places